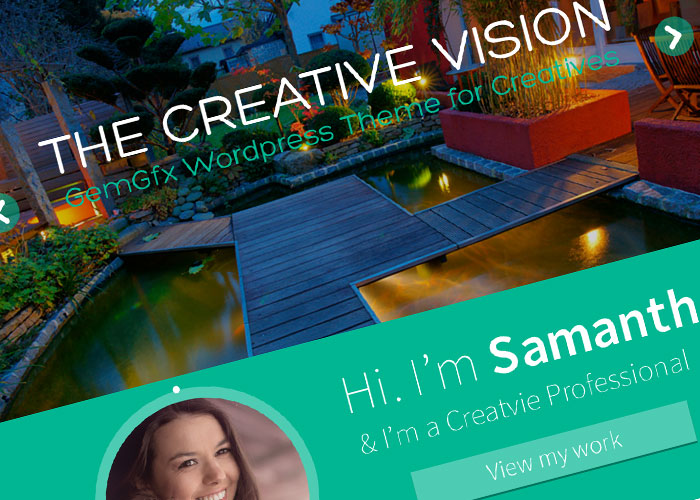 A few weeks ago we told you guys we had begun building our very first WordPress theme that we decided to call Vision. We had our our fellow creatives in mind when we decided to begin this project so it will be a fully customizable, responsive, portfolio, gallery theme. We decided to build it from scratch using our GemGfx design and the Twitter Bootstrap framework. We’ve used other WordPress themes before and customized themes ect, but this has been without a doubt new territory for us as we’ve never before built a WordPress theme from scratch to make something of our very own.

Oh and as we said before, when it’s finished we’ll be making it available as a free download so that all our fellow creatives will be able to use it. We decided to approach the project in three phases.

Phase One: Designing the PSD

We went into Photoshop and began the design process. We wanted to create something cool to look at, as well as modern and flashy. We think we accomplished that. We went with the modern flat UI design and one page slider template. Phase one was completed in early September and we announced it on Facebook.

Here’s how it looks.

Next we took on the task of converting the PSD file we had built to html. This involved a lot of div tags, css . Yes you guessed it, coding is not this designer’s strong suit. So it was an interesting and educational journey. We are happy to announce, that we’ve completed phase two, and now have a working html template of our PSD design. If you’d like to see it in action hit the demo button.

This is just the html template, so much of the functionality is still missing. When we embark upon Phase Three, we’ll be working on all that other fun stuff.

This phase will be the most challenging for us as we have never worked on a WordPress theme from scratch before. It will be fun though as we are looking at it as a learning experience. In just the two phases so far, we’ve learnt a great deal, and we expect that our learning will continue when we enter Phase Three. We hope to create a theme that can be seamlessly integrated into any WordPress website, and offer great customization options as well as being easy to use. We hope to have the entire project completed by January 1st 2014. Our official Site Launch Date.

We’ll keep you posted here, on Facebook and Twitter, as to the progress of the project and when the theme will be available for FREE download. Comment and let us know what you think of the project so far, and if you want to suggest any functionality you think we should include in the WordPress theme.

As usual, if you think we’re cool, feel free to spread the word about GemGfx.