When the movie Avatar was released, I remember looking at an interview with James Cameron where he said that the idea for the Avatar movie was actually born about 10 years prior to the making of the movie. Cameron said he had the idea, but the technology and means were not available to create what he had in his imagination. I never thought that one day I would be echoing his sentiments.

As long as I can remember, I have always been infatuated with drawing. I always tell the story of how I was often scolded in school and by my father for drawing cartoon characters in my school exercise books. My mother in her wisdom bought me a sketch pad and a Flintstone’s coloring book and instructed me to exercise my creativity in those rather than my school books. Thus began my Graphic Design Career. (True story). 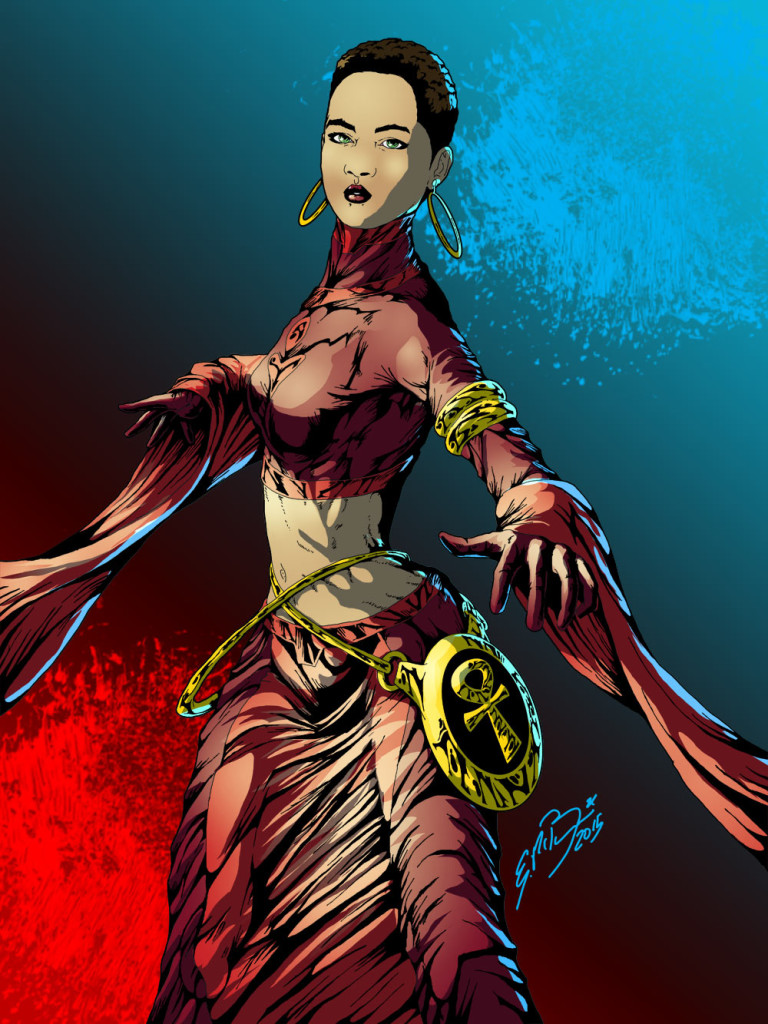 In the early 1980s, I fell in love with comic books. I collected many of them over the years and was fascinated not only by the fantastic artwork, but the characters and stories that the images brought to life. I thought to myself back then how cool it would be if I could create my own comic book with my own characters and my own story. In the imagination of a young boy, the possibilities were infinite, and achievable. It is at this time the idea of these characters and the story was born.

In reality however, the dream of becoming a comic book artist from Trinidad and Tobago and making a living, was just that, a dream. The means, technology, respect and wherewithal were not available to the comic book artist back then. Comics were little more than a recreational pastime. It was not to be seriously considered as a profession. So the idea was in all practicality shelved and the priority of becoming a Graphic Designer to earn a living took the front burner.

Things have changed a great deal since then where Graphic Novels and Comics are concerned. Today Graphic Novels and Comics are highly respected as holding a weight of creative value. Many movie titles that we are familiar with, had their beginnings in graphic novels. Hellboy, 300, V For Vendetta are just a few. All three films were huge successes at the box office, and they had their beginnings as Graphic Novels. The great pioneer Stan Lee has seen many of his comic book characters come to life on the big screen, and he needs several construction trucks to hold the amount of money he has made of of titles such as Spiderman, Iron Man and The Avengers. These are well known titles, but there are millions of other artists and writers out there who have produced fantastic Graphic Novels that are worthy of acclaim. 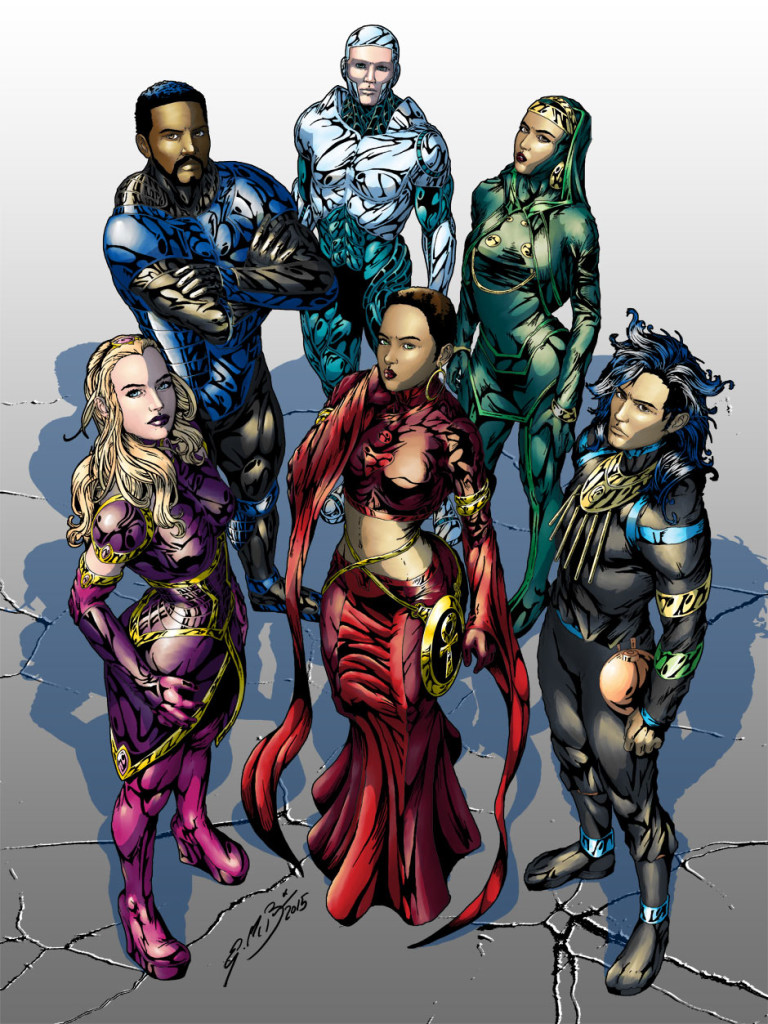 Now almost three decades later, the fulfilment of the lifelong dream is close to becoming a reality. I’m happy to announce the official beginning of the development of Celflux: The Graphic Novel. Now with the technology and means available, I am able to write, illustrate and publish my first Graphic Novel. With the help of my wife, we’ll be working on the project step by step. We’ve decided that we will be doing a six book series, the first of which will be called; “Reluctant Heroes”. Here is the proposed cover artwork for the first volume. (Not the final artwork. This will most likely change.)

To have a look at how the cover artwork was put together, you can check out the project on Behance. You can also follow the Celflux project’s development via the Facebook, and Twitter. We’ll also keep you updated on the GemGfx Facebook Page.

We’re excited about this project, as it’s a lifelong dream come true and even if we never make a cent from this, we would be satisfied in the fulfilment of that lifelong dream.

We recently launched a Patreon campaign for Celflux. If you would like to support the development of the project feel free to stop by. Here’s the link. Celflux on Patreon.

The creators of Celflux, Everard J. McBain Jr and Dixie Ann Archer-McBain won in the category of Best New Commer in the ASHCAN Awards 2015. Celflux was also nominated for Best Series. This Celflux’s first ever nomination and win for anything. We are really encouraged. We want to thank Dan Barnes and Scott Mack of ASHCAN – The Alternative Showcase Hub for Comics and Animation for the award and want to say congratulations to all the other winners and nominees.

In addition to this, we were also featured on several prominent blogs such as Afropunk and BlackGirlNerds. We look forward to this as a sign of things to come for Celflux. 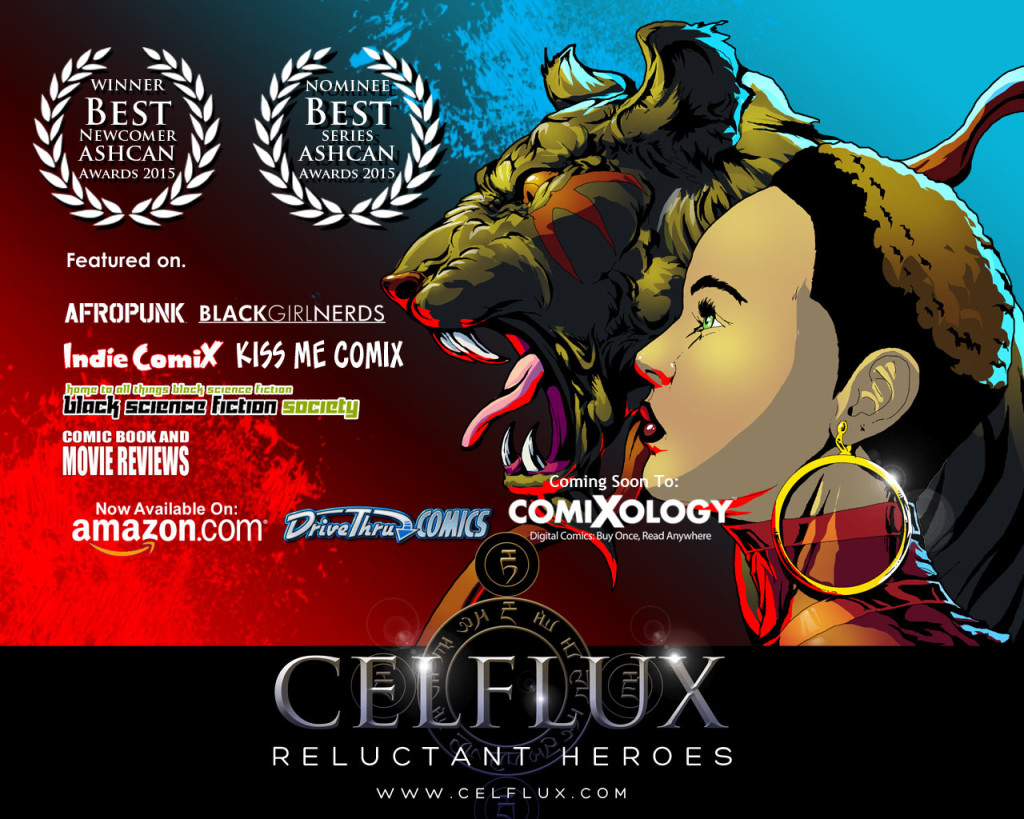