We had now come to the part of the design process where we analyse the data we collected during our research. This step is also called Brainstorming. We basically study in detail the research, and bounce ideas around till something hits us. My wife was instrumental in this step. So much so that I told her she had to be present at all brainstorming sessions from now on. We looked at all the aspects of Trinidad and Tobago life, and were fascinated by the vast and rich culture we have here in Trinidad and Tobago. We drew upon several channels of inspiration when we came up with the logo. 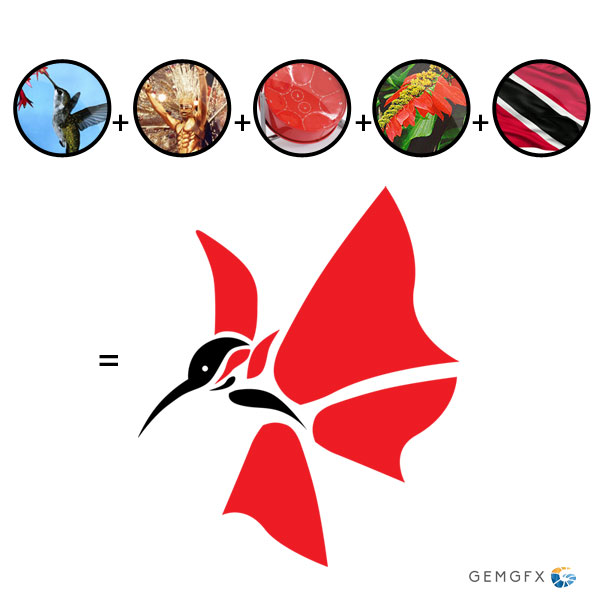 Trinidad and Tobago’s National Birds are the Scarlet Ibis and the Cocrico (Tobago Pheasant). The Scarlet Ibis is the larger bird representing Trinidad and the Cocrico, the smaller, represents Tobago. These birds are represented in the Trinidad and Tobago Coat of Arms. The hummingbirds have been included for sentimental reasons. It’s said that more species of humming bird are found in T&T than any other country in the world, and that early inhabitants of Trinidad called Trinidad Iere or Caire, which means the Land of the Humming Bird. So we decided to go with the hummingbird to develop the logo and it’s influence can be quickly seen when looking at the logo.

An explosion of colour, music, revelry, and creativity, Trinidad’s Carnival has spawned similar celebrations around the world; but nothing on earth can rival the abandon, euphoria and stunning spectacle of our festival.

The logo was also designed to have the look and feel of the inside of the Steel Pan.

The National Flower of Trinidad and Tobago, the Chaconia, is sometimes called Wild Poinsettia. It is known as the Pride of Trinidad. This was also one of the influences of the design as it was designed to have the feel of flower petals.

The flag of Trinidad and Tobago was adopted upon independence from the United Kingdom on August 31, 1962. The flag was chosen by the independence committee of 1962. Red, black and white symbolize fire (the sun, representing courage), earth (representing dedication) and water (representing purity and equality). The obvious choice of colour. We decided to make red the most dominant colour in the design because it is the most dominant colour on the flag, and it is the one that is most readily recognized as representing Trinidad and Tobago.

Next we worked on a tagline.